Recently, we had a blog post from Crew member Matt talking about the timelessness of the classics; some games age to perfection. Good games that can produce the same joy a decade after they are released are more rare than you would think. It seems that certain “good” games lack the timeless quality that make them enjoyable to play years later or are far surpassed by the games that succeeded them. In honor of the NES Classic edition, we’ll be remembering a few of them in this month’s “Nintendo Experience”.

The next “Experience” inductee is Super Mario Bros. It may not be a favorite of mine, but no one can deny its impact on video games since its release. It showed us what a video game could be. The controls were revolutionary (though now dated. Sorry), and changed the way we saw physics in games. It had so many levels with each presenting a unique challenge to the player. Thankfully, though its influence is undeniable, better things came afterward to replace it.

Next up, I’ll be inducting Super Mario Bros. 3 into the Experience. It’s a game that changed everything about Mario, the platforming genre, and video games in general. For years it was the best-selling non-pack-in video game of all-time. The different worlds, the new power-ups, all of the copious secrets; these are just a few of the elements that work together to make this a classic.

It could also hold the key to the Mario timeline. If you pay attention to the stage play motif (such as the curtain rising/falling and Mario exiting the stage at the end of each… stage), it can be seen that the game is just one big production. This could mean that Mario isn’t a plumber, but a character with differing roles depending on the production. This would be akin to many of the great golden era cinema comics, like Charlie Chaplin, Laurel and Hardy, and the Three Stooges, who, while playing the same “character”, would be in vastly different contexts with no fluid storyline. That would explain the sporadic variety of Mario’s activities; he’s just an actor put into different scenarios without an overarching narrative. I digress.

On top of the power-ups and items, Super Mario Bros. 3 has incredible level design. For example, some of Pipe Land’s stages are completely vertical, and when you reach the stage’s sides, they wrap around, as if Mario were circling the inside of the warp pipe. Such a simple idea, yet the possibilities it creates are mind-blowing. Each stage is memorable because it presents a new puzzle and a new challenge. Of course, none of this would matter if the creators had not nailed the most important aspect of game design: control. Whereas the controls of the original, though revolutionary, have not aged very well, Mario 3’s controls are perfectly implemented, and have aged like a nice wheel of brie. 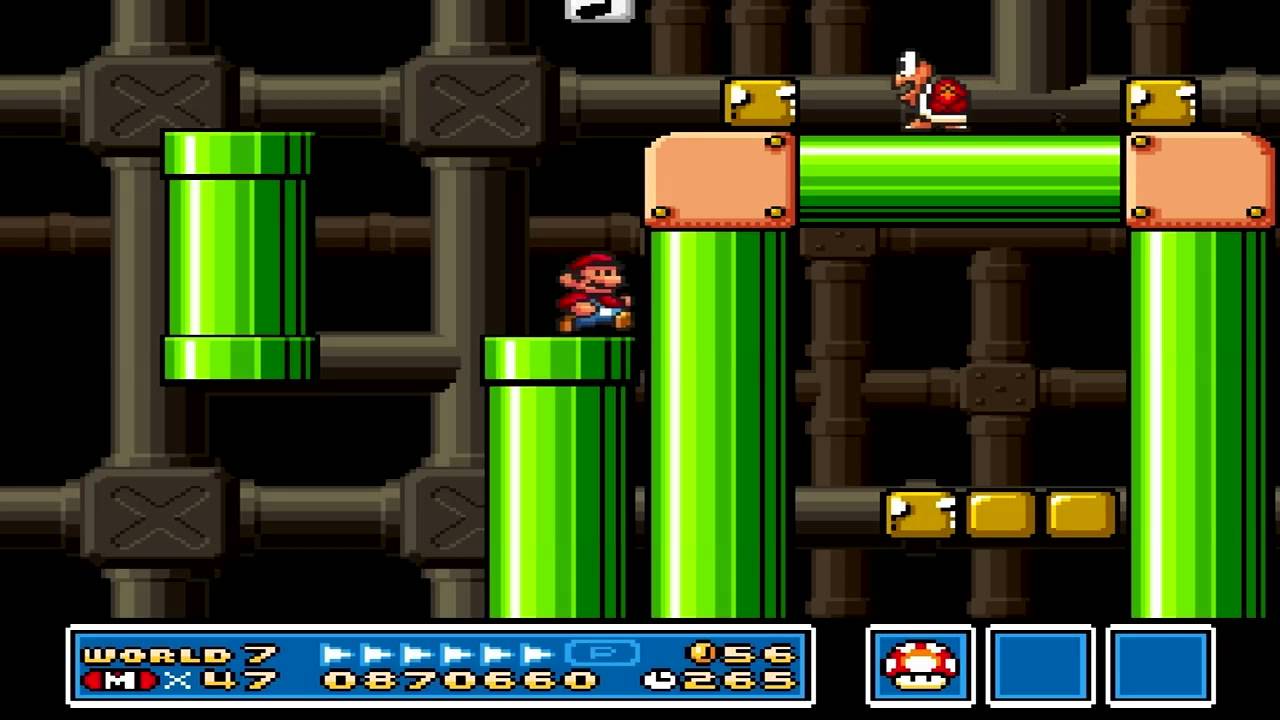 Lastly for this month, Kirby’s Adventure makes the cut.

If there was one word to describe this game (and also Kirby’s appetite) it would have to be “massive”. There were so many worlds and levels to explore, copious secrets scattered everywhere, boss battles that all required a different strategy, and of course, tons of special abilities. In contrast to his first quest, just about any baddie you inhale will give you an ability that had its own strength and weakness. These powers ranged from the silliness of Hi-Jump and Splash, to the super cool Sword and Back-Drop, to the devastation of the Tornado and UFO, and you wanted to try out each one to see where it would be useful (or just because it looked cool).

Obviously, the developers have expanded his powers over the years, but this is where Kirby as we now know him got his trademark copy ability.

If you’re a Nintendo fan and haven’t enjoyed these (at least recently), what are you doing?!? Pick them up and play them now!

Simeon has been a Nintendo fan since he can remember, growing up with an NES in the house. Now he loves to play, talk, and write about all things Nintendo. He can usually be found playing fighting, platform, and adventure games.

Latest posts by Simeon (see all)